The "Futurotheque" is a fictional app store with apps that will confront you with speculative future scenarios and dilemmas. It can be seen as an open ended, real-life roleplaying narrative about our life in the next era of computing. It's a story situated in a future in which the man/machine integration has reached a stage where software is interfering in each and every aspect of life, mainly caused by the permanent influence of an augmented reality wearable.

Presumably, in a near future a light weight and comfortable AR wearable will be available, and for the sake of this semi-fictional story it's assumed that people have finally dropped resistance and accepted devices into their daily lives. It will cause people to morph into some sort of robot, when they're following tips, suggestions and instructions appearing in their HUD (heads up display). With sensors and a 24/7 always-on AI powered camera monitoring us, the cloud will be able to make the HUD interactions relevant and useful. It is a scenario that has oftentimes been covered in series and books, but in this narrative it's a hands-on experience. Instead of an AR wearable a smartphone is used to interact in the story. And even though the speculative software in this story does not exist yet, it plays a role in the narrative through configuration options, the interactions and the notifications.

You can experience the Futurotheque in two ways:

To scroll through the Futurotheque apps there is a web-based version of the content which lets you interact with the fictional speculative apps as if they're real. You'll get notifications and questions from a fictional OS. 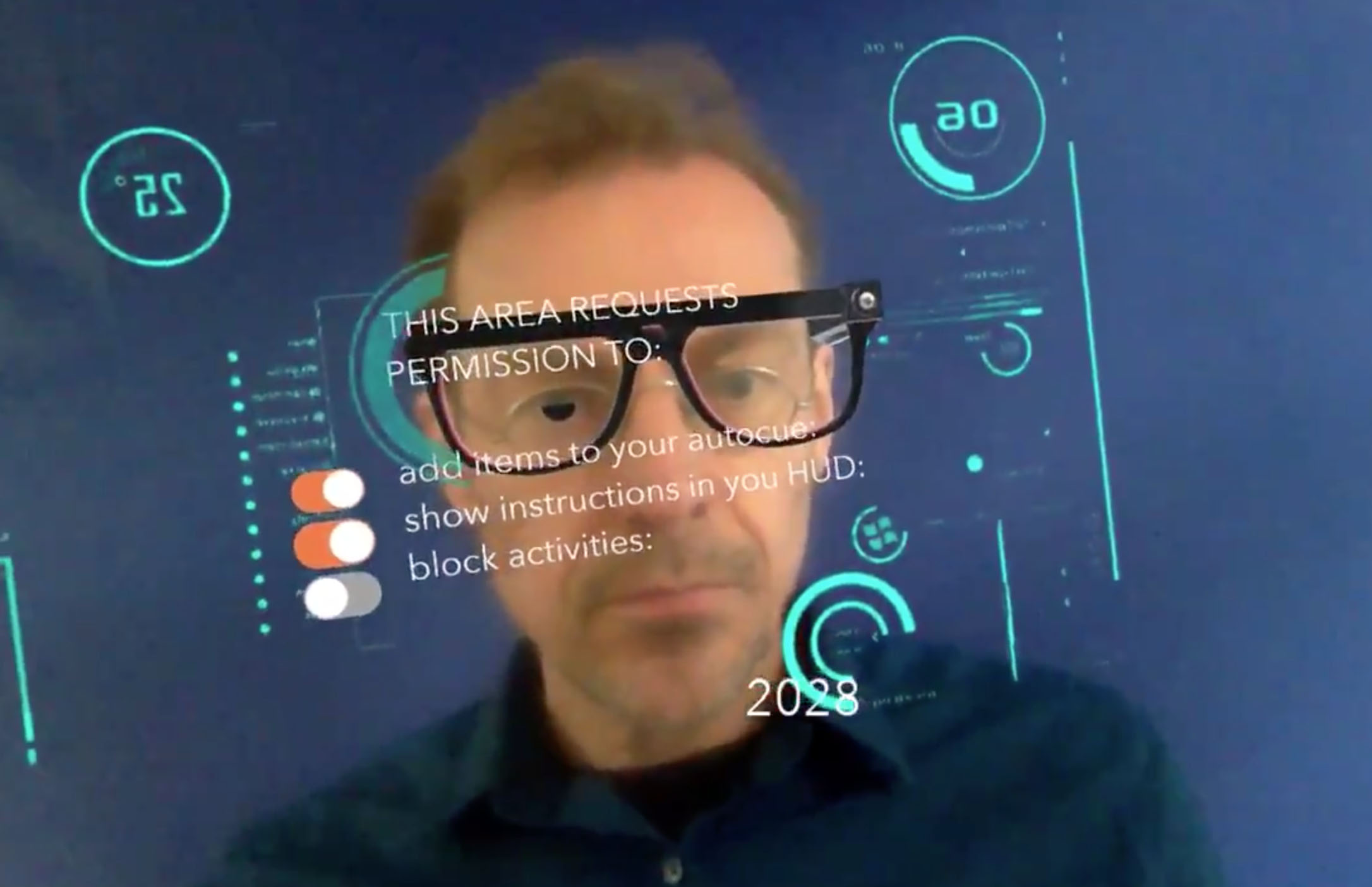 The future of AR How will we experience our cities in 10 years time? There's a big chance that we'll interact with a partially digital world when we're wearing our AR glasses, for a specific occasion or even 24/7. Virtual items will appear in our environment and physical items will get an AR interface that can be differentiated depending on who is using it. Even when encountering other people there will be a digital layer inbetween us. The holographic screen in front of us will show us the output of an external intelligence that watches the world with us. It will guide us, help us and give suggestions. But will it also ask what we want? To what extent can we configure it and choose the role it will play in our life? You'll find out in the "Futurotheque".

We'll soon live in a world in which everything around us is covered with digital media and interfaces. It might seem a small step from where we are now, but AR glasses are going to change the type of apps that define what we see and what we do. We're already accustomed to live our life in a hybrid universe. We move around our cities guided by mobile devices and the apps we install on it. Digital technology plays a role in almost every aspect of our life. But Silicon Valley is working hard to lure us into a mixed reality world which we will experience through their AR glasses. Not just the hardware, but also the software will be hard to resist. There won't be another Google Glass debacle. With the AI in the cloud processing a massive amount of data about gathered by using the AR glasses to monitor what we do and where we are, the apps and services these devices are going to offer will be unlike the things we're seeing with task-oriented mobile AR these days. But that makes it difficult to understand the what's ahead of us. The "Futurotheque" is an ongoing research project which aims to make speculative thinking about this future tangible and practical. It is focussed on the relation we will have with new technologies entering our life. What do they mean from a personal perspective? What choices can we make, what configuration options should we have? What started as a web-based speculative app store is now an interactive narrative which can be experienced as a face-filter effect. That helps a viewer to get a better picture about the presented choices, and the facefilter format helps to make the story feel like a personal peek into the future. The current step in the development process is to extract a configuration file after going through the narrative. Instead of awaiting what Silicon Valley allows us to choose, can we use these 'preemptive' config files to take a first step describing the conditions under which we want our future to appear and function?